Series of papers on dissonance

Since 2014, I have been investigating on recalcitrant and implicit cognitions (which includes epistemic akrasia and implicit bias) and the phenomenon of assertion-behavior dissonance (i.e., cases in which the person acts contrary to what she explicit asserts). I have published my findings in several journals like Philosophical Studies, Synthese, Dialectica, Erkenntnis and Pacific Philosophical Quarterly. My defended view is that some recalcitrant cognitions involved in the mentioned cases are beliefs. They are a type of belief fails nevertheless to function correctly. My underlying broader interest in understanding such phenomena is to understand the nature of beliefs and of rationality. 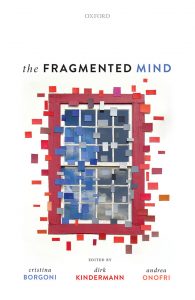 Mental fragmentation is the thesis that the mind is fragmented, or compartmentalized. Roughly, this means that an agent’s overall belief state is divided into several sub-states–fragments. These fragments need not make for a consistent and deductively closed belief system. The thesis of mental fragmentation became popular through the work of philosophers like Christopher Cherniak, David Lewis, and Robert Stalnaker in the 1980s. Recently, it has attracted great attention again.

This volume is the first collection of essays devoted to the topic of mental fragmentation. It features important new contributions by leading experts in the philosophy of mind, epistemology, and philosophy of language. Opening with an accessible introduction providing a systematic overview of the current debate, the fourteen essays cover a wide range of issues: foundational issues and motivations for fragmentation, the rationality or irrationality of fragmentation, fragmentation’s role in language, the relationship between fragmentation and mental files, and the implications of fragmentation for the analysis of implicit attitudes.

By continuing to use the site, you agree to the use of cookies. more information